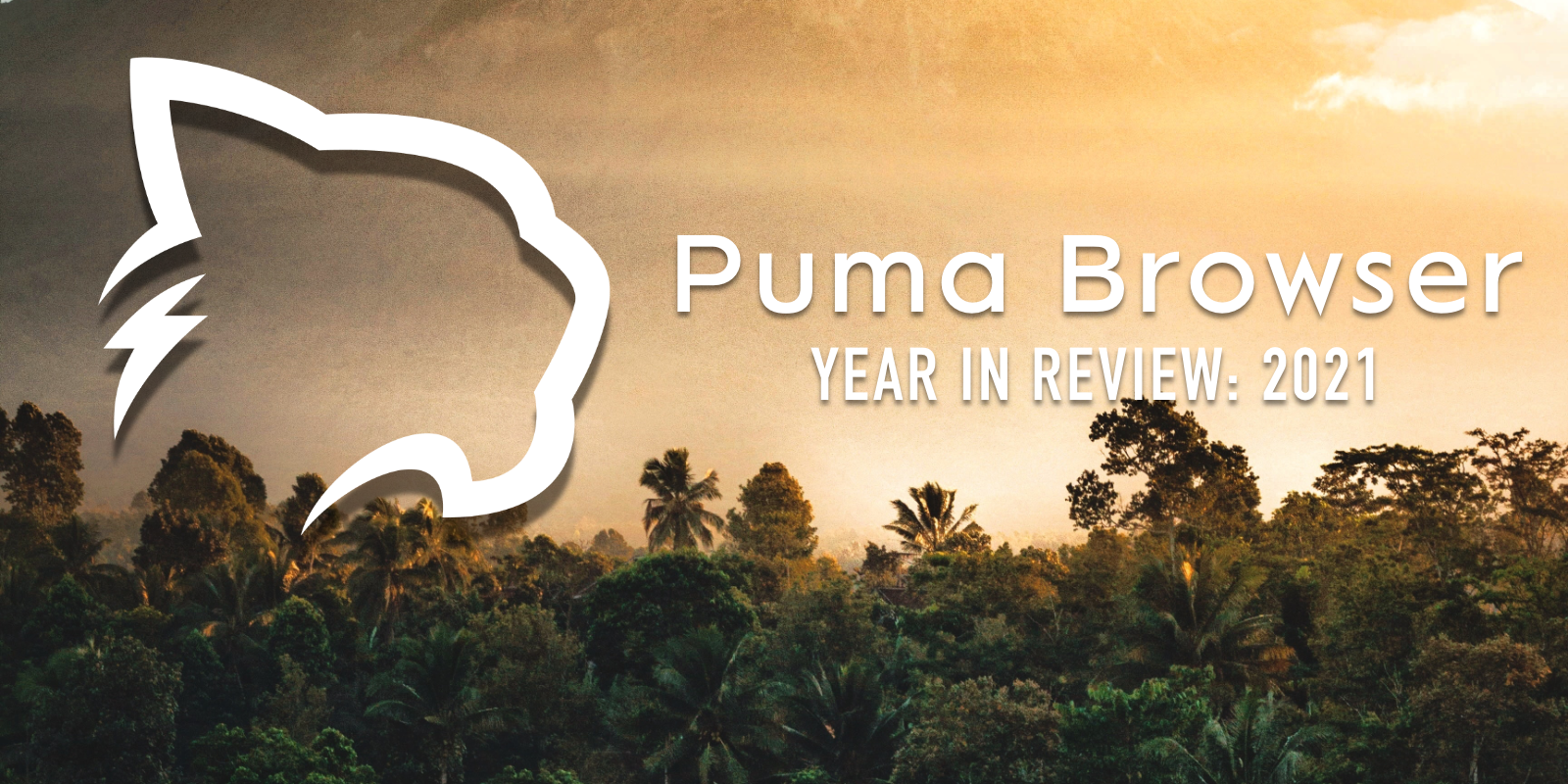 Puma Browser set the tone for our year by ringing in 2021 with Handshake (HNS) support. The substantial update lays a foundation for Puma to be the web3 surfer’s sleek and dynamic web3 portal of choice. Web3 is where the Internet’s future is brewing, and we are all-in on pioneering this nascent frontier.

Our engineering team consistently delivered power-ups all year—leveling up what Puma Browser can do. The steady flow of updates—some subtle, some drastic—kept our mobile apps at the forefront of private, web3-optimized surfing that puts users and creators first.

Along the way, Puma Browser forged alliances with key partners. If you’re eager to explore web3’s ability to revive the Internet’s original ideals, we’re more than happy to team up. Making the flow of knowledge more democratic, inclusive, and efficient is Puma Browser’s core purpose.

🥂 This week, we’re proud to share Puma's Year in Review: a four-part series encompassing the top developments in the web3 jungle and Puma Browser’s growing role in this emerging ecosystem. Today, we reflect on the Protocols & Partnerships that made 2021 special for Puma’s community, team, and users.

Handshake (HNS) was built to solve major problems with how the current DNS-based web infrastructure mismanages domain names and certificates. Puma rang in 2021 with HNS support for Android and iOS, recognizing its growing popularity with the web3 community and appreciating Handshake’s alignment with our own values.

Control of Top-Level Domains (TLDs like .com and .org) are monopolized by one governing body, ICANN, and cannot typically be owned by the general public. Instead, both public and private companies like Verisign control TLDs such as .com, .net, etc. These companies act as a registry, leasing subdomains (e.g. pumabrowser.com) to the public in exchange for a yearly fee. Handshake offers a decentralized alternative to this system.

As a decentralized protocol, Puma is proud to support Handshake’s work in righting DNS’ wrongs. With no central authority monopolizing the system, HNS servers are distributed and managed by global peers—individual nodes with no single point of failure. HNS domains are inherently less susceptible to corruption and attack from bad actors—music to our ears!

If you’re new to Handshake domains, here’s our roundup of reasons to love them:

To play with Handshake name resolution in Puma Browser for Android and iOS:

From Order to Chaos with the Ethereum Naming Service

As you delve deeper into the web3 jungle, managing your cryptocurrency addresses quickly starts feeling like wrangling cats. To the Puma community, the Ethereum Naming Service (ENS) protocol was a godsend. ENS domains let people bring myriad crypto addys under one username, in addition to letting users build decentralized websites; create public usernames and avatars; and support most major cryptocurrencies.

ENS support within Puma Browser is seamless. ENS names default to an “.eth” suffix, but existing DNS domains (“.com”, “.net”, etc.) work too. If you try resolving almonit.eth in Puma Browser, you’ll head to a decentralized search engine on an ENS domain (almoit.eth). Try jbenet.eth or vitalik.eth as well. ENS named that don’t have an IPFS website set up yet will resolve to a few powered by our friends at rainbow.me. Give it a spin on Android and iOS.

Visit ens.domains to take your first steps with ENS. »

Out of This World: the InterPlanetary FileSystem

Hot on the heels last year of launching a preview of IPFS support to Puma Browser, we used your feedback to refine the feature with updates and bug fixes. We prioritized support for the IPFS project because of their alignment with Puma’s own core values.

The InterPlanetary FileSystem works to make the web “upgradeable, resilient, and more open” with its promising file storage protocol. At its core, IPFS creates a distributed network to store files and locate them by its contents, instead of its location (aka how URLs currently operate).

IPFS File requests are fulfilled by any number of worldwide nodes, with preference given to geographically closer ones. IPFS users become nodes themselves, serving stored file information to anyone else who may request it on the network. Puma Browser supports the resolution of IPFS addresses on iOS with support for Android coming in a future release. Try entering any IPFS address into Puma’s address bar (e.g. “ipns://ipfs.io/”) and tap “Go.” It’s literally that easy to navigate to and explore web3-ready sites!

IPFS has a wide range of benefits for the web at large. Its distributed nature makes the protocol more resilient and secure versus centralized servers that are vulnerable to DDoS and other attacks. IPFS can speed information transfer by retrieving data from local nodes rather than potentially remote servers. Like HNS and ENS, entities looking to censor or take down information will find it difficult to do so because of the decentralized nature of the protocol.

Check out the IPFS project’s thorough documentation to learn more. »

We’ve Got a Friend in Neeva

Back in June, we announced a new partnership with Neeva, the world’s first ad-free, private subscription search engine. Puma and Neeva are of a similar mind in regards to ads and their negative effect on the web. We share a vision of the web that is free from ads, their incentives, and most of all respects user privacy.

As part of our partnership earlier this year, Neeva is now a default search engine in Puma Browser. You can select Neeva as your default, or optionally as a Quick-Search Engine, under Settings » General » Search. As Neeva’s motto states, “You are not the product.” We couldn’t agree more.

Read the original Neeva announcement on our blog. »

See You Tomorrow for Part 2

To say it’s been an eventful year for Puma Browser would be an understatement. In 2021 we greatly expanded Puma’s capabilities, made key partnerships, and spread the word about our mission far and wide. Tune in tomorrow for Part 2: The Web Monetization Ecosystem.

‘Til then, you can join the Puma community on Discord, follow us on Twitter, and tell your friends and family about our apps for Android and iOS